Since my last post I appear to have found the proof of something that, although I was aware of it, I had firmly placed in the conspiracy theory and science fiction department … until now.

So without further ado … suck on this.

The major journal/magazine Torture: Asian And Global Perspectives has published a number of articles by Cheryl Welsh. Welsh graduated from Lincoln Law School of Sacramento in 2007. She is founder and director of Mindjustice.org, which is where I discovered these articles. 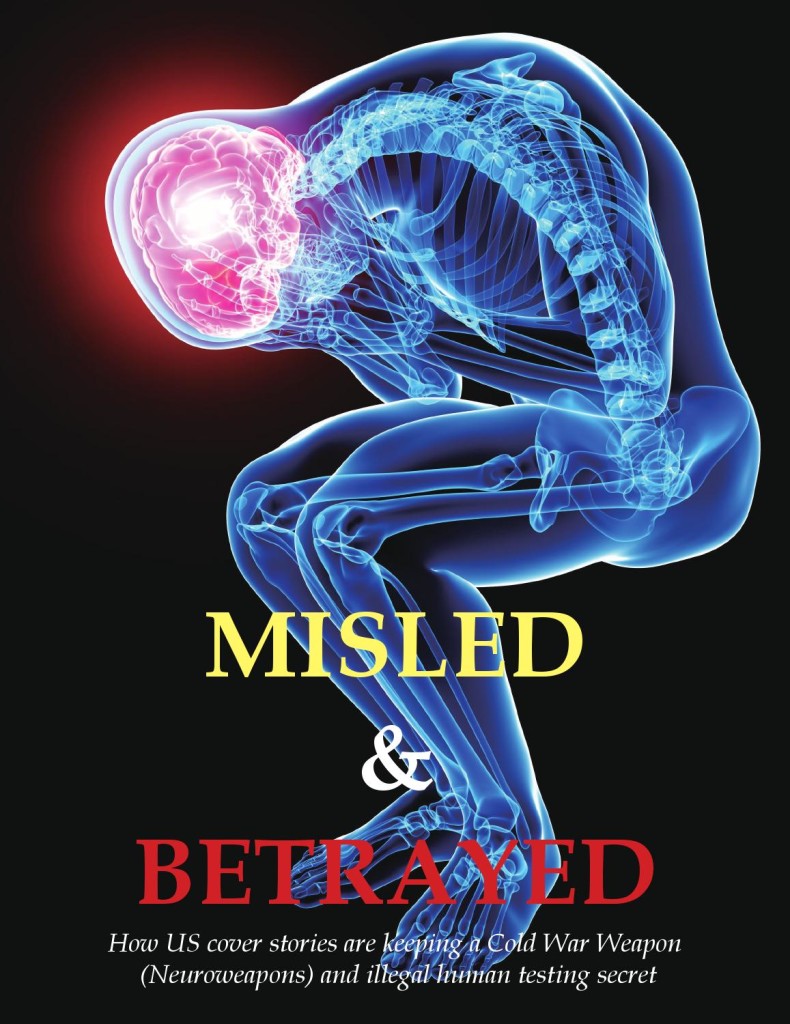 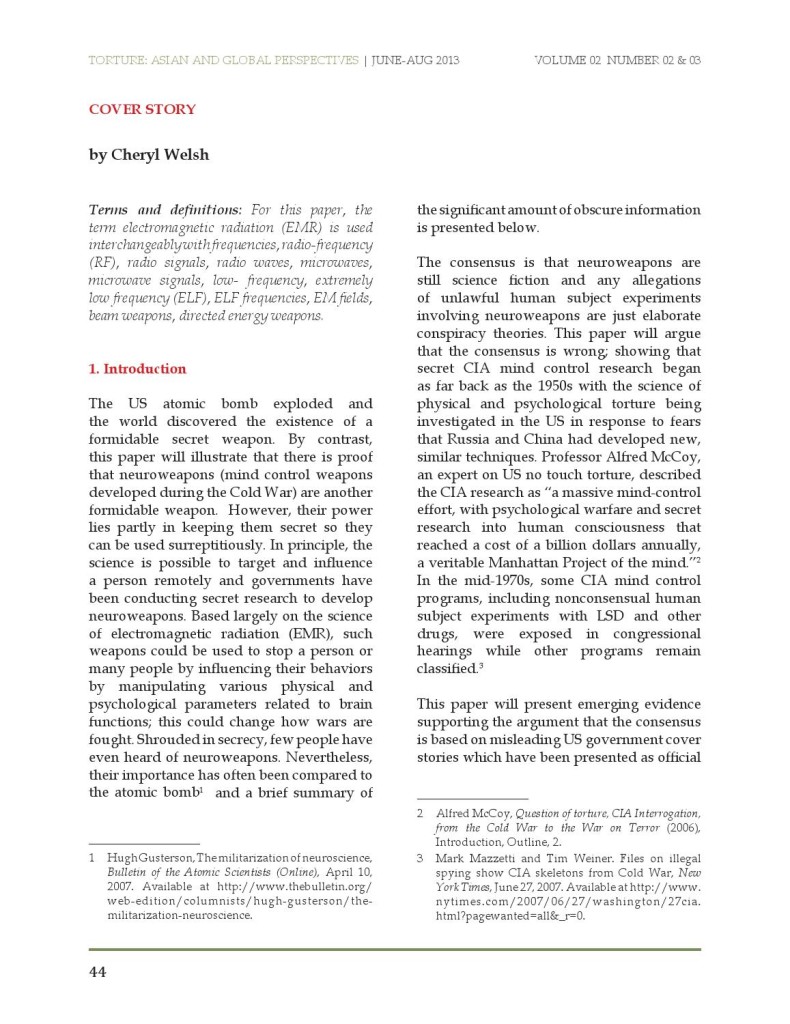 Please note the Torture magazine/journal uses the slightly irritating ISSUU reader. However the pages are simply image file JPEG’s. Right click on page and, in Firefox, use “Inspect element” to see the link to the JPEG file. I managed to extract all the images this way using a script, but out of respect for the magazine’s publishing policy I won’t reproduce them all here, just the relevant article images compressed into a ZIP file. 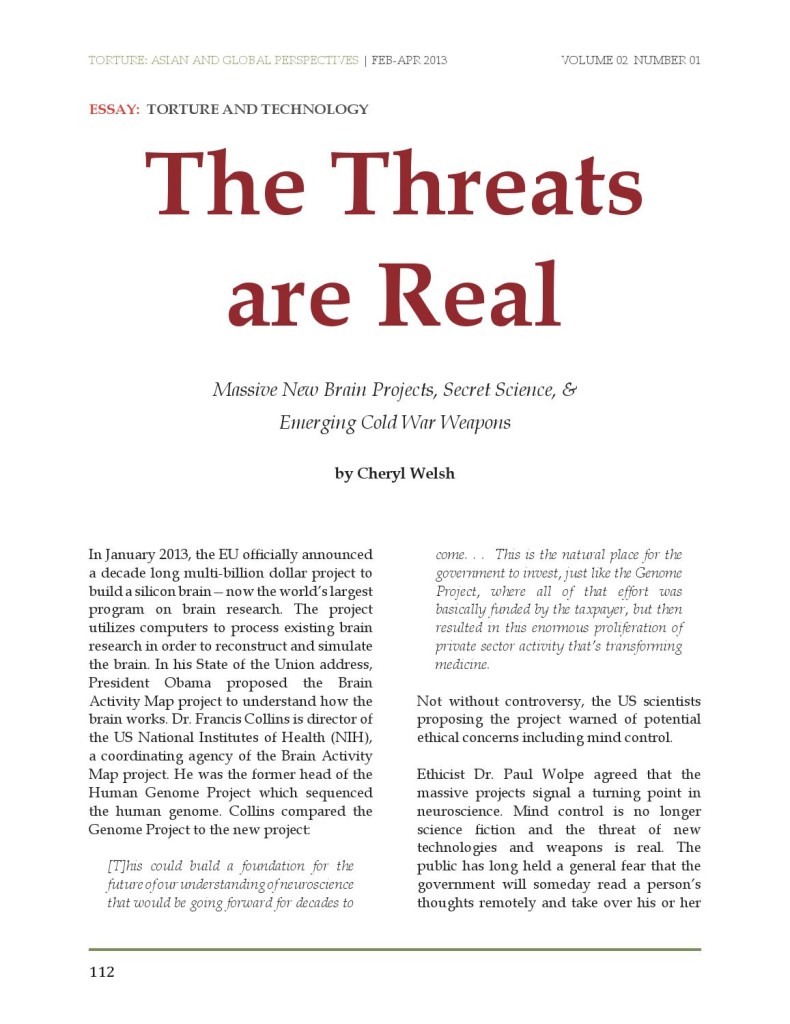 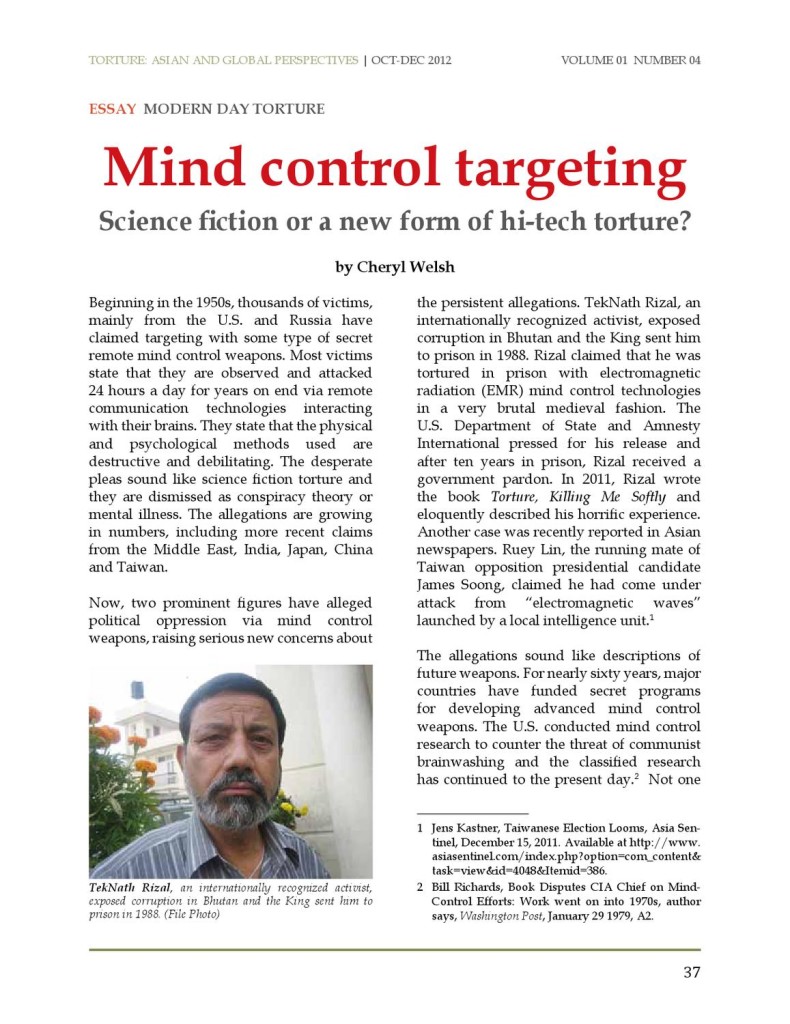 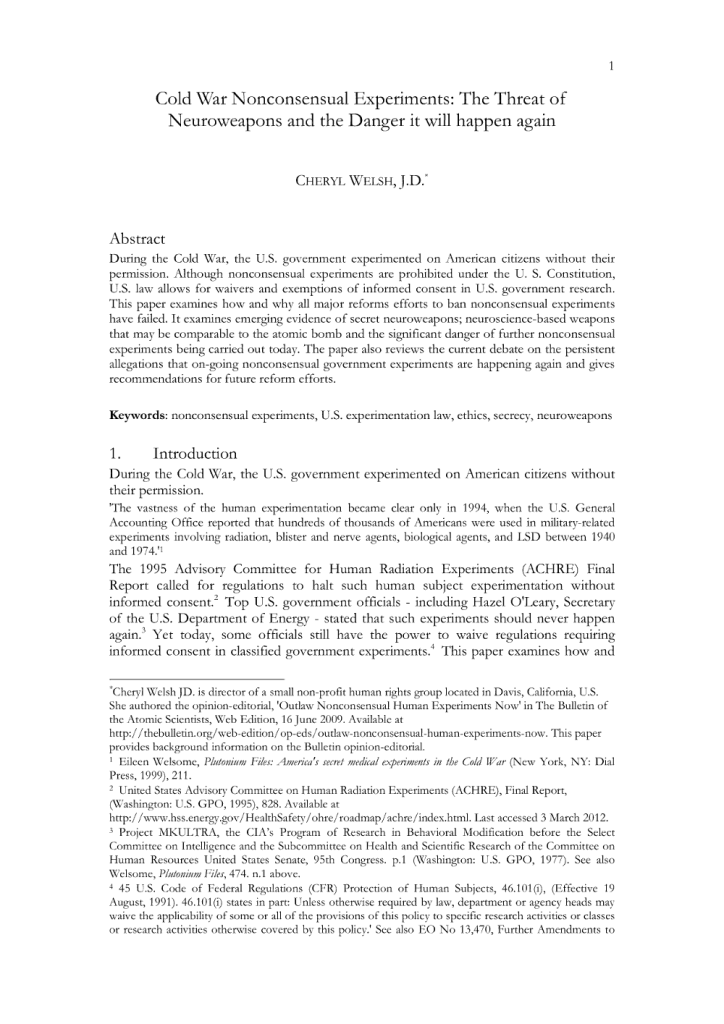 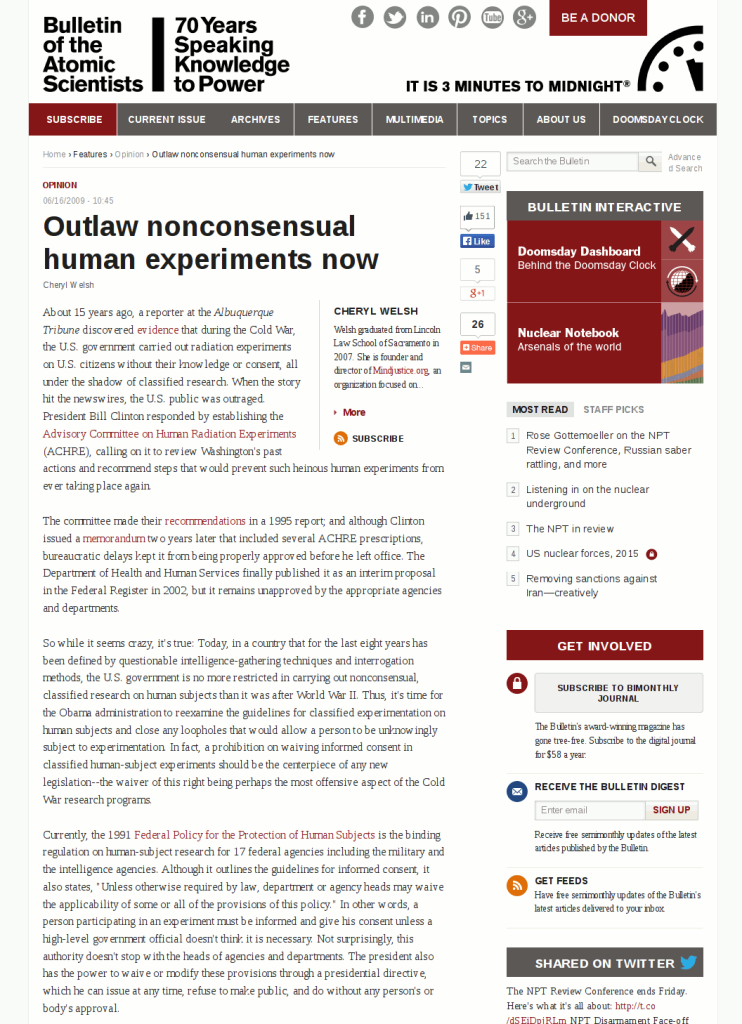 The Bulletin of the Atomic Scientists website opinion section (classified as a Biosecurity article), June 2009.

So there you go tin foil hat wearers. Vindication ? … Joking aside, there is some wisdom to being sceptical of conspiracy theories. We’ve all seen them on the internet. The clue to one of them being a theory is the often complete lack of references, or, if there are references then they are subject to outrageous speculation. I’ve also seen evidence that some conspiracy theories are deliberately made up by corrupt intelligence agency factions and other criminal syndicates in order to spread fear. However this one, which was once a “conspiracy theory”, in my opinion now shows clear evidence for it being real. For those who don’t get it yet we’re talking about reports over the years of being “attacked by the CIA”, “watched”, “thoughts being implanted on my head”. You know, the usual “he must be a nutter” sort of story. Some cases may originate in severe trauma caused by other sources of mistreatment. That in itself is bad and I would like to see those people treated with respect and given genuine non-invasive medical treatment. They certainly should not be treated with derision as its well known that severe trauma can cause all sorts of “crazy” behaviour. But the real bomb shell here is that there really is evidence to support many “crazy” claims. Its a huge scandal that we’re locking people up in dodgy asylums for trying to report these things. I know some mental health professionals are probably not that well informed in this area (please read this page!), but others seem to have a rather offensive attitude towards anything that just seems “crazy”. I think we’re all in danger of falling into that trap, I know, I’ve done it myself. But most people would not forcibly drug and maybe even electroshock those people just because “they sound crazy”. Anyway there’s a whole other kettle of fish here that I don’t want to get into.

So, still not convinced ? You’d be right to be sceptical. That’s healthy. Convince yourself of the evidence FIRST before jumping to any conclusions ! But for me the coup de grâce was the historical research document provided by Welsh. This, I must say, for me has been one of the most cathartic documents I’ve ever read. Just when my sceptical mind was wanting to put the whole thing on the back-burner because “there’s more important things to do”, a key bit of the history would jump off the page at me … here:

This whole bloody disaster fits perfectly into the history of the Cold War, Dr. Stranglelove and all the rest of it. Right from testing radiation on unsuspecting victims in the Manhattan Project up to testing LSD on people, without their permission, as part of MKULTRA. I’ll leave the reader to draw their own conclusions.

The other issue here is the quality of work provided by Cheryl Welsh (thank you !). Her style immediately caught my attention, no doubt learnt as part of her legal training. She knows how to research and her language is not riddled with the florid paranoia that contaminates so much of the writing in that other field – conspiracy theory – rather than this field, which is more like some kind forensic search for the truth. By the way I don’t mean to insult victims of Neuroweapons by mentioning this paranoia. I know how difficult it can be to write or speak without getting angry or jumping to conclusions when these kind of tortures have caused so much pain and mayhem to an individual. But unfortunately the atmosphere created by political correctness and obsessions with “mental illnesses” blind some people to why someone would come across that way.

So on to maybe the most important question … WHY ? Welsh covers this as well. Did you know that the Nuremberg Code is voluntary ?

“The fundamental weakness of ethics codes, such as the Nuremberg Code, is that they provide voluntary guidelines only.”

( Cold War Nonconsensual Experiments: The Threat of Neuroweapons and the Danger it will happen again by Cheryl Welsh on June 1st 2012 )

Yes, you read that right … VOLUNTARY. After the death camps, after Dr. Mengele and all the rest of it. Yes. Voluntary. Fucking unbelievable. This is like saying to the Fox …

So what do we think is going to happen next ? You see, there are reasons that we have ended up in this disaster and why the above articles are, sadly, not that unbelievable when you look at the historical context. As Welsh points out, decade after decade new laws have been passed “banning human experimentation” only to have clauses put in that allow officials to wave in human experimentation in decisions that can be made in secret. So NOW do you realise WHY such human experimentation projects still exist ? As The Torture journal points out, its all very well passing laws but they have to be ENFORCED or they are meaningless. In the West, have we anaesthetised ourselves to the The Truth ? Do we believe that these things only happen in far away “failed states” ? Scepticism and demanding to see evidence is an important request. But when victims of these kinds of abuses are often ignored, treated as “conspiracy theorists” or “mentally ill” I am reminded that many communities were willing to offer support and understanding to victims of torture … and more importantly they were BELIEVED. The use of torture can be a sad testament to some of the problems of our times. It can be depressing and I certainly would not want to rub anyone’s face in it, not that I have not felt that way occasionally! (If you really want to face it then read the editorial in this issue of Torture, Asian and Global Perspectives).

Being a victim and now survivor, I have received extraordinary acts of kindness from many people, but often still feel invisible through lack of understanding and lack of belief. I know this is partly because society has not been properly informed about the nature of this kind of torture. It’s also a tactic of these criminals to mislead people and cover up the truth. However I hope more people out there can begin to appreciate that there is real hardcore evidence now for these kind of abuses, as I think Cheryl Welsh shows very effectively.

Lastly I wanted to mention mention the Captain America film, Winter Soldier. Any Americaphile should get the Thomas Paine reference …

“THESE are the times that try men’s souls. The summer soldier and the sunshine patriot will, in this crisis, shrink from the service of their country; but he that stands it now, deserves the love and thanks of man and woman. Tyranny, like hell, is not easily conquered; yet we have this consolation with us, that the harder the conflict, the more glorious the triumph. What we obtain too cheap, we esteem too lightly: it is dearness only that gives every thing its value. Heaven knows how to put a proper price upon its goods; and it would be strange indeed if so celestial an article as FREEDOM should not be highly rated.”

I have already been surprised that there are already articles out there such as the one’s by Welsh in respected publications like Torture. But then watching Winter Soldier really did it …

Those screen grabs from the film show a system to target individuals for nasty purposes. For those that think that this is “just science fiction” (the neuroweapons problem, not the film) might want to read Captain America: The Winter Soldier” Is About Obama’s Terror-Suspect Kill List, Say the Film’s Directors if they think I’m just making idle guesses here. It looks like some in Hollywood are seriously pissed about Obama’s Kill list. Yes, that’s the initiative to blow people away, with no trial, with drone strikes. I would say that project has emerged straight out the cynical crossing of the line when it comes to violating the sacred rights of the individual vis’a’vis human experimentation and Neuroweapons.

More so, guess what a major support group calls the real life victims of these mistreatments ? Yep. a TI, or Targetted Individual …

Now a message from our sponsors, Intergalactic Satire Incorporated ! Here’s a little present for those who have been paying attention …