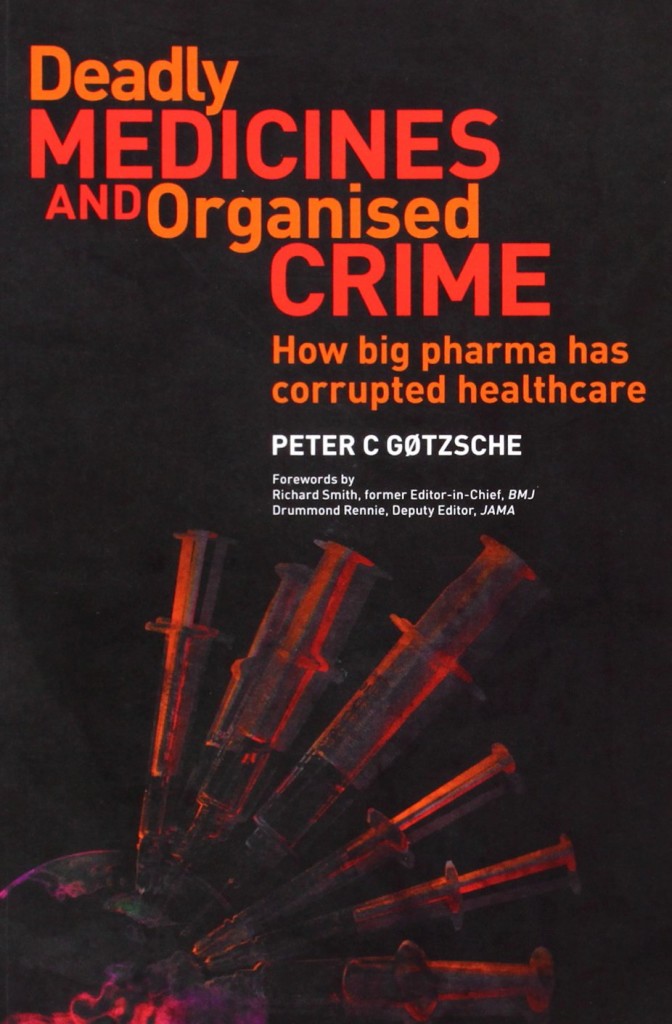 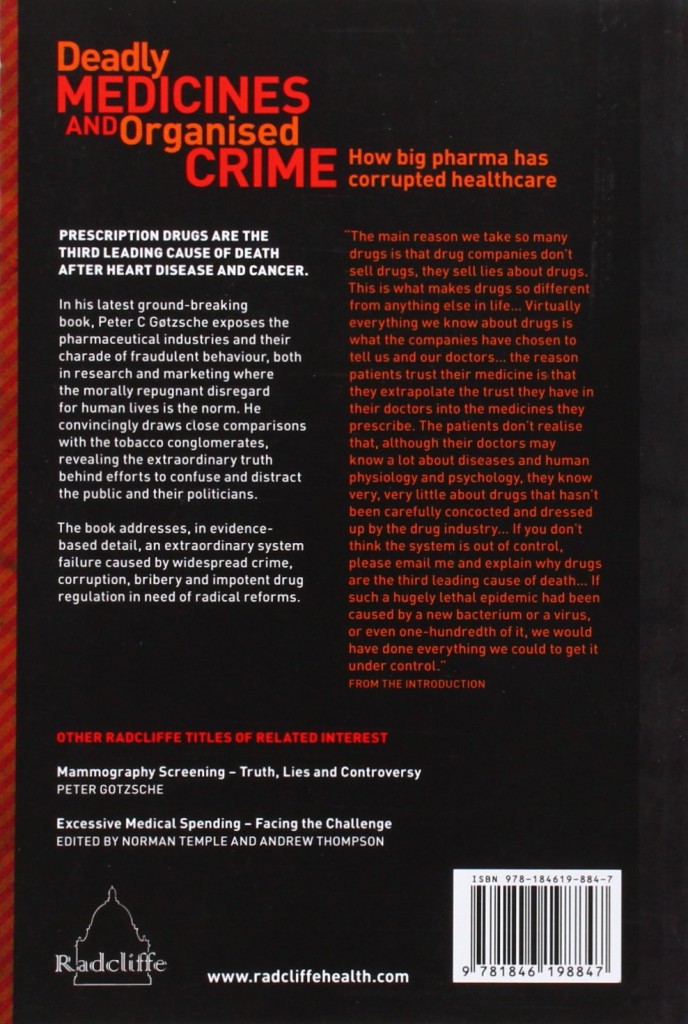 … won a prize, from non-other than the …

… British Medical Association, the TRADE UNION FOR DOCTORS IN THE UNITED KINGDOM !!!

“The British Medical Association (BMA) is the trade union and professional body for doctors in the UK.”

Why would this (see back cover above)  …

… be “controversial” or be based on “no evidence” when the BMA, yes the freaking BRITISH MEDICAL ASSOCIATION, the trade union for doctors in this country, yes THIS COUNTRY THE UK … has given this book an award. Why would that very same BMA have given this book an award in 2014 if this is all a “conspiracy theory” ? Do you really think the BMA would go anywhere near this, if this were not proven, ABSOLUTELY PROVEN ? Something so serious that YOU ABSOLUTELY HAVE TO HAVE YOUR EVIDENCE RIGHT.

Am I getting through to anyone yet ?

All those “suicides” cynically excused as being the result of the victims “mental health problem”, and misunderstood by those who have either fallen for the lies or collaborate with this form of organised crime, are MURDERS. Strong words ? Yes. Look. I know this is tough. Parents and friends may have stood by or even recommended these murderous “medications” either totally innocently, or, as I suspect, in many circumstances with other issues involved like domestic abuse or intolerance of someone’s behaviour. But God is forgiving. Those who become aware of this situation, I know its awful. I’ve been there. There was an attempt on my life in the 1970’s by these criminals in the pharmaceutical companies. I was drugged, as a child, with a drug called Imipramine. This is a drug that has been involved in child deaths before. It made me sleep walk and hallucinate. I was forced by this drug into trying to kill myself, when I was 6 ! I went through the actions of starting to slit my wrist, but something, either my survival instinct, or God, had other plans. I turned my hand over and cut the back of my hand ! I was eventually taken off that drug, however it caused me health problems for the next 20 years that I could not explain until the year 2000 when I looked this drug up in a medical dictionary. The problems with it were made obvious and everything else fitted together. But then a second attempt was made on my life. I started trying to get help for the health problems the drug had caused. After writing a letter with the help of the Citizens Advice Bureau, my doctor at the time threw this letter in the bin – IN THE BIN ! – Right in front of me, after I had asked for help. That left me traumatised. When I returned to the CAB to get a copy of this letter as I had lost my own copy – it had gone. It was missing from their files. This behaviour suddenly becomes recognisable in light of Gøtzsche’s book, and if you think that situation was unique to me you might want to read …

… Oh, the second attempt on my life. After being ignored by the Doctor I made the mistake of reaching out to an abusive Father. Along with the other corrupt elements in the pharmaceutical industry I was then pilloried and bullied into a distressed and traumatised state which was then used against me to get me into a psychiatric ward in order to silence my outrage over what the pharmaceutical maniacs had done to me in the 70’s, and continues to do to me if only at a somewhat reduced level. It was the oldest trick in the book. Denigrate the victim and throw doubt on their capacity to speak the truth … just as had been done to dissidents in the former Soviet Union who were unjustly put in psychiatric wards to shut them up. The same thing is going on today ! In that ward I was forcibly drugged with a drug called Zyprexa. It was another attempt on my life and this time I almost did not survive the resulting “suicide attempt” which was, as I found out later, absolutely caused by the drug (I was not suicidal before being given it).

So I know who the perpetrators in my story were. It is for each person to judge their own behaviour in light of the revelations in this book. Ultimately we are dealing with organised crime in the pharmaceutical industry so blaming each other for it is probably not very helpful. I must admit I find this all very difficult myself and have to remind myself that even though law enforcement and many government departments are aware of this problem (see below) that it has not patched through to the public yet. The media have not made major reports on the situation even though they DO report on some aspects of it. But of course they will. The scandal will break eventually.

So maybe if we can clearly identify the real source of the problem here we can all stop blaming each other and getting uncomfortable about this. We can stop attacking whistle blowers and victims because “they are taking away life saving medications from people”. Once we know we have been lied to hopefully the rest can fall – peacefully – into place.

The FBI in the United States have a Pharmaceutical Fraud Initiative

“Cases initiated under the Pharmaceutical Fraud Initiative focus on manufacturers, Internet web sites, and individuals selling illegal prescription drugs and controlled substances. A continued increase in pharmaceutical sales, and the rising cost of fraud with a nexus to the pharmaceutical industry, compelled the FBI to establish a national initiative to pursue, investigate, and prosecute individuals/corporate entities perpetrating this fraud. The FBI has also developed cases on stolen, counterfeit, and diverted pharmaceuticals. The number of cases related to pharmaceutical fraud continues to increase. At the end of Fiscal Year 2004, the FBI had 150 pending investigations in this area.“

Financial Crimes Report to the Public 2005

The Serious Fraud Office in the UK are currently investigating pharmaceutical companies.

“At the invitation of the UK’s Association of the British Pharmaceutical Industry (ABPI) Richard Alderman, Director of the UK’s Serious Fraud Office (SFO) recently addressed ABPI members at their Legal Day conference to speak about the SFO’s work and the new UK Bribery Act which comes into force in April next year. His comments though very important for the pharmaceutical sector went largely unreported.

Significantly, Mr. Alderman singled out the UK pharmaceutical industry noting that on anti-corruption it was on the “high risk register” of the U.S Department of Justice (DoJ) and “will be receiving a considerable amount of attention from the DoJ.”

“In March, 2005, the UK House of Commons Health Select
Committee reported on the influence of the pharma-
ceutical industry. The committee began its inquiry in June, 2004, took evidence from 50 witnesses during nine public sessions, made four site visits (including trips to Brussels and Australia), and received nearly 160 written sub-missions. Its overall findings were clear: the influence of the pharmaceutical industry is enormous and out of
control.“ 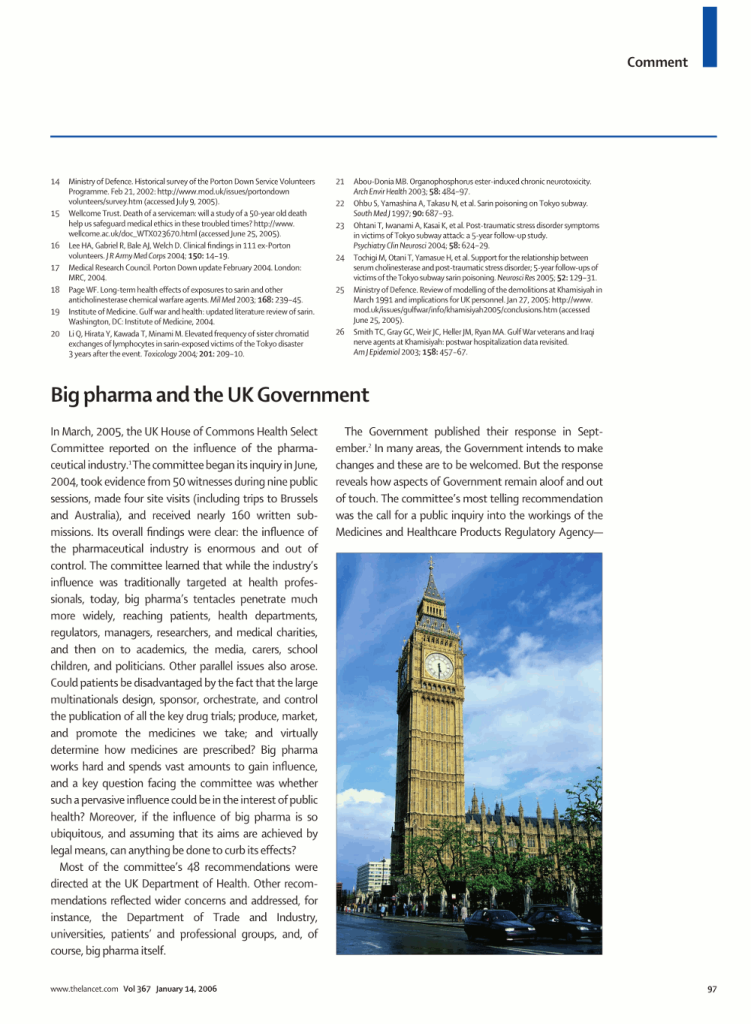 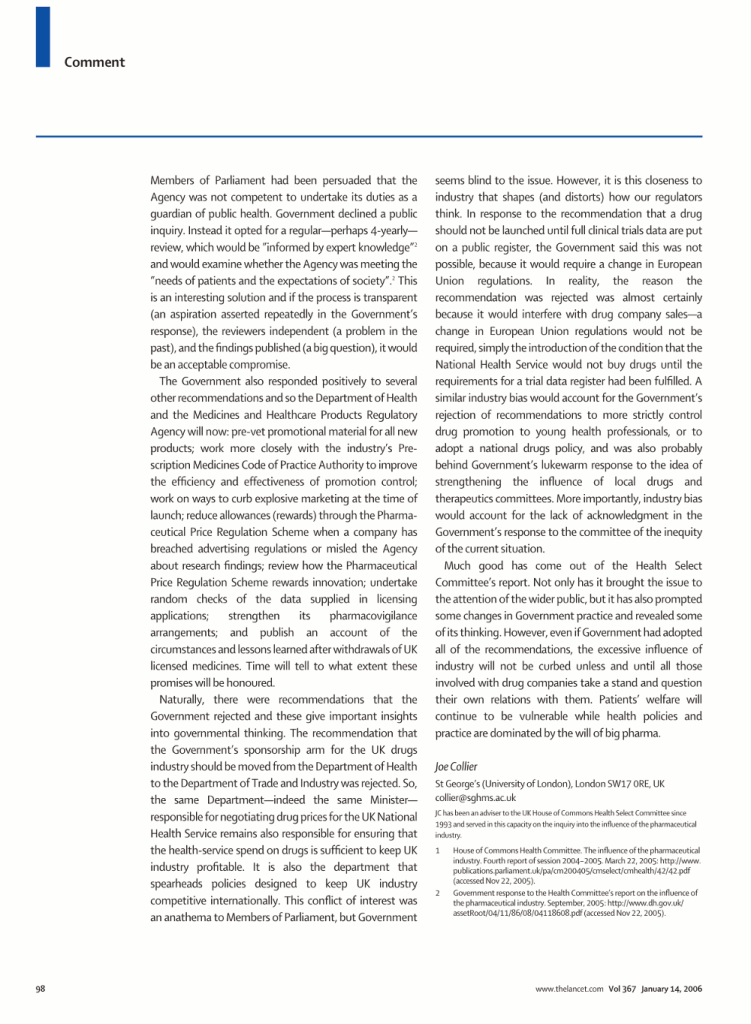 All doctors in the UK should know about this issue now, or soon, after the award given to this book by the BMA

See above. (well I would add that one again wouldn’t I !).

Pharmaceutical companies want us to believe that “everyone is taking our drugs” and that they are fighting for the best interests of humanity. What a load of bollocks ! Look at the evidence on this page. Think about those statistics that show that large numbers of people are taking pharmaceuticals, especially the psychiatric ones. How many of those people are actually throwing away those drugs or flushing them down the loo ? I know I was, and it saved my life.

If you still don’t believe that all this is a REAL PROBLEM, then you need to look at Corporate crime in the pharmaceutical industry is common, serious and repetitive by Peter C. Gøtzsche, Professor MD, DrMedSci, MSc. 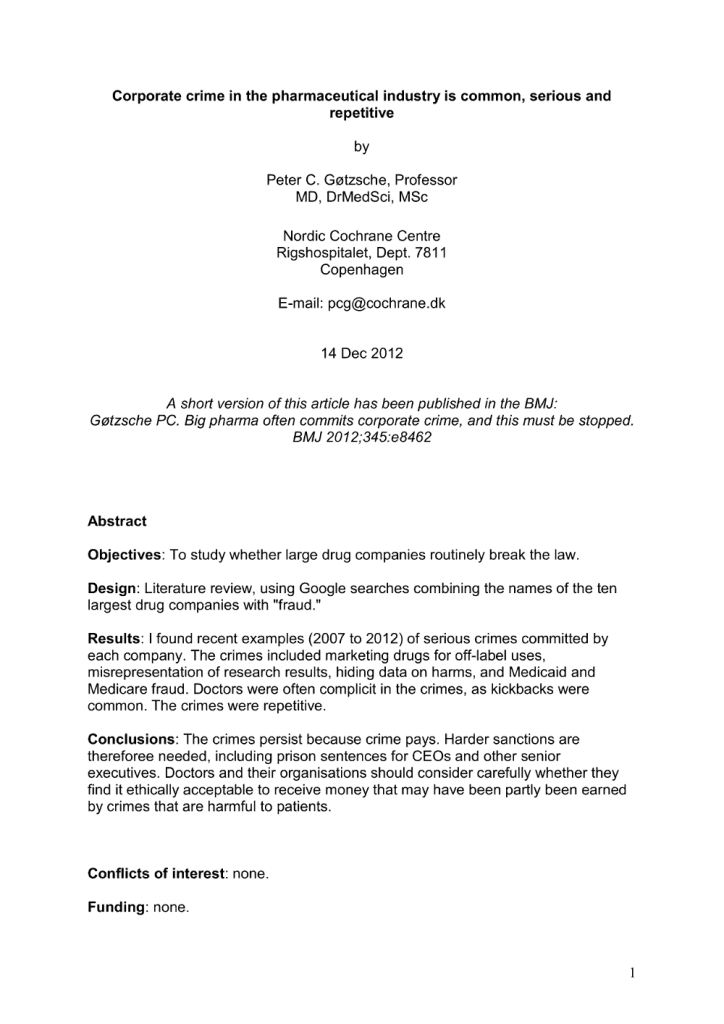 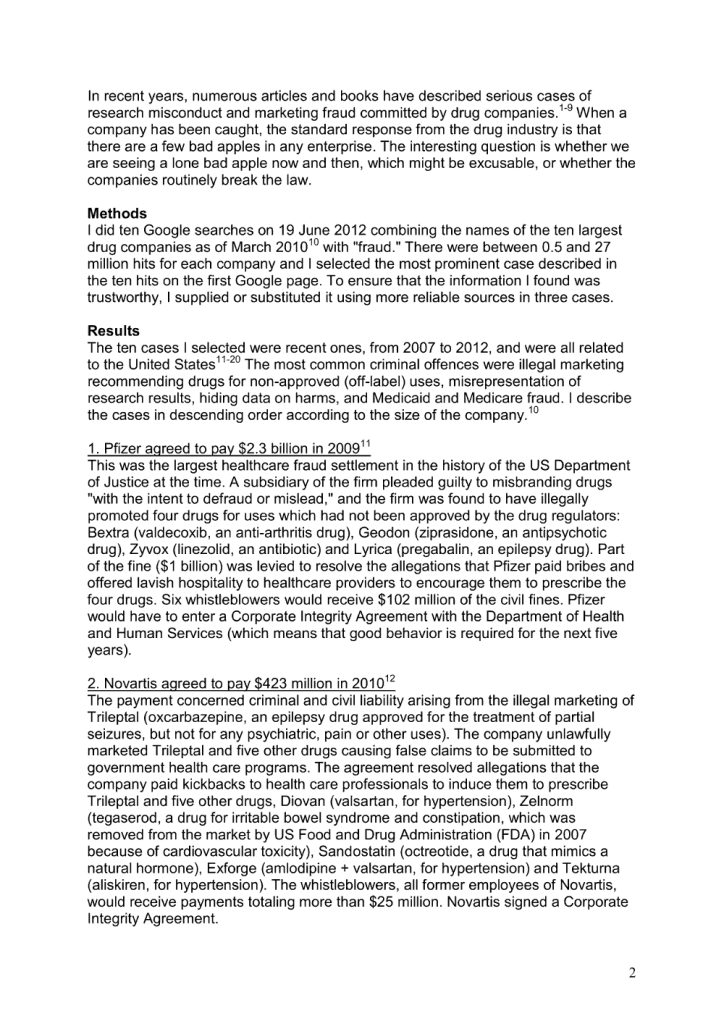 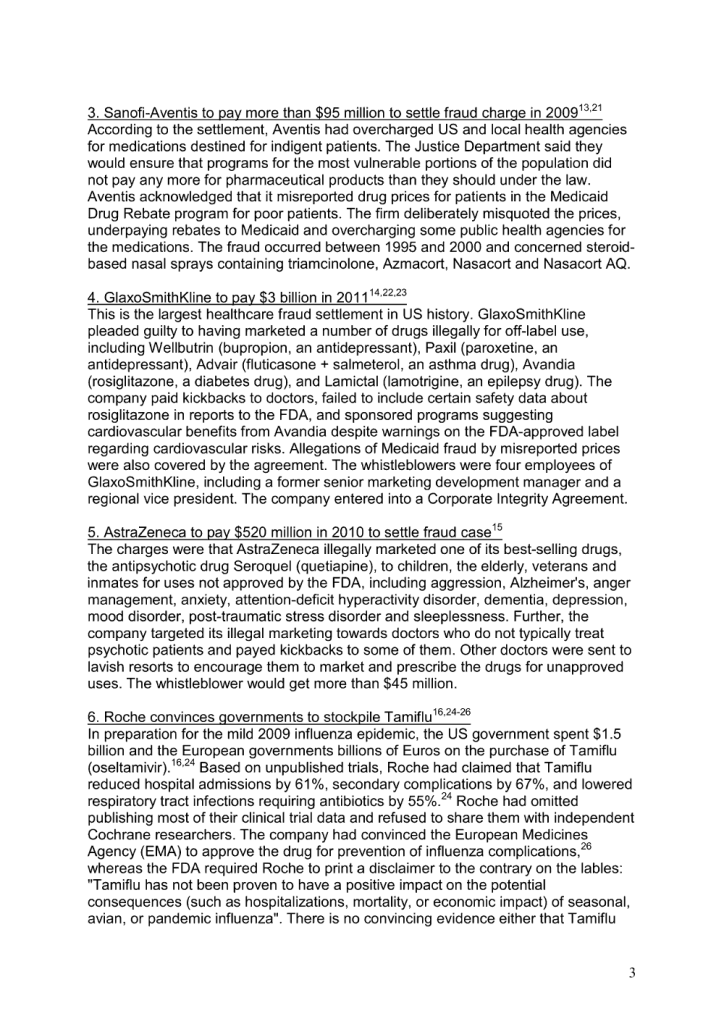 For any pharmaceutical employees reading this –

Let’s hope, let’s PRAY, that this awful period is starting to come to and end. I have called it the Eugenics Wars, and a war it has been. A war using chemical weapons. A war that is now being won, peacefully, by people who do have a conscience and who do know the difference between right and wrong, and are not prepared to ignore the casualties in that war. Amen !3,257 views