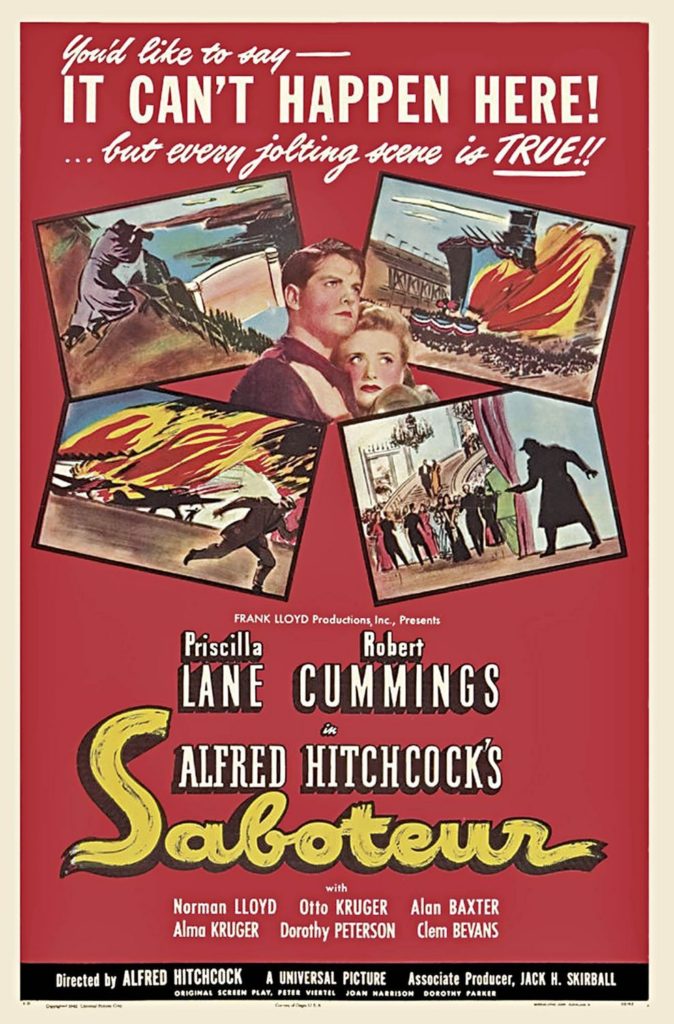 In the Hitchcock film The Saboteur a man is falsely accused of an act of sabotage he did not commit. In the period the film was set the USA was under threat from various NAZI spies and sympathisers. After Victory in 1945 you would think the NAZI/Fascist problem would have gone away. But, in the aftermath of one of the most chaotic episodes in human history, mistakes were made at the Nuremberg trials that allowed some of the worst crimes of the Holocaust to go unpunished and unexamined. It was Psychiatrists who participated, and in many instances organised, the acts of horrific human experimentation in the camps as well as the “euthanasia” (murder) of mental patients and the disabled.

“When the war ended, the exposure and punishment of those responsible for the Nazi barbarities was a rather delicate matter. Dr. Donald Ewen Cameron interrupted his Canadian brain butchery to go help the British Crown’s Tavistock psy­chological warfare unit evaluate the sanity of Nazi official Rudolph Hess. Cameron’s unique insights into the Nazi men­tality had made him a valued part of a secret wartime psychi­atric committee in Washington to assess the trends in the Nazi leadership’s thinking. Cameron now testified as an expert at the Nuremberg war crimes trials. His old OSS colleague Allen Dulles, later the CIA director, was reportedly pleased by Cameron’s suggestion that each surviving German over the age of 12 should be given electroshock treatment to burn out remaining vestiges of Nazism. That part of the Nuremberg Code dealing with scientific research was drafted by Boston psychiatrist Leo Alexander; he soon afterward joined with Auschwitz experimental mas­termind Otmar Verschuer in Franz Kallmann’ s American Society of Human Genetics.”

As I showed in a previous blog there is evidence to show that modern psychiatry was hijacked by political forces from 1945 onwards. This partially answers the question … WHY ? Why does the NHS Psychiatric system here in Britain use toxic drugs that are known to be dangerous, ECT and other coercive and damaging methods ?

How I got onto this: The Massacre of the Jews article by Varian Fry, 1946 ! The almost complete disbelief in Britain that these atrocities are even going on in the British psychiatric system reminded me of something I had heard about the first reports of the NAZI death camps not being believed. Replace the word “psychiatrist” with NAZI and “mental patient” with Jew and you end up with something very close to what is going on here.

So the Hitchcock film “Saboteur” expertly fictionalises the history of the men behind Hitler.  At one point there is a scene where a financier of Hitler makes a speech that echoes some of the influences behind why British Psychiatry is so corrupt (also see Was Montagu Norman a Nazi sympathiser?) …

“His old OSS colleague Allen Dulles, later the CIA director, was reportedly pleased by Cameron’s suggestion that each surviving German over the age of 12 should be given electroshock treatment to burn out remaining vestiges of Nazism.”

“Alexander was a leading proponent of electroconvulsive (shock) therapy and insulin shock therapy.[5] According to psychiatrist Peter Breggin, Alexander – who was German-trained and German-speaking – was also an early eugenicist, and the failure of the Doctor trials to bring psychiatrists to justice was due in part to Alexander being the chief investigator.[6]”

“1944-48: after Nazism, the International Congress on Mental Health

In 1944, with the concentration camps in full swing and Europe burning, Montagu Norman resigned from the Bank of England. He immediately began a new project, ironically related to his own repeated mental breakdowns and hospital­izations. Norman organized the British National Associa­tion for Mental Health. In its formative stages the group was based at Thorpe Lodge, Norman’s London home, where he had met with Nazi Economics Minister Hjalmar Schacht to plan the Hitler regime’s 1930s …”

“On Tuesday, in a newly digitally published history, the Bank revealed that it had helped the Nazis sell gold looted from Czechoslovakia in March 1939. The documents put Norman right at the heart of the decision, raising fresh questions about his suspected Nazi sympathies.

According to the documents, the gold was being held in the Bank’s vaults on behalf of the Bank for International Settlements (BIS) – the central bank for central banks. On March 21 1939, BIS requested the Bank transfer £5.6m of gold – £735m in today’s prices – from “Number 2 Account to Number 17 Account”.

The Bank was “fairly sure” the transfer was from the National Bank of Czechoslovakia to Germany’s Reichsbank, the record states. But, regardless of its suspicions, the transfer was made that very same day. Over the following 10 days, the Reichsbank sold £4m of the gold, with the proceeds poured into Germany’s ongoing rearmament.”

There is an entire network of these NAZI sympathisers …

“Norman had married Priscilla Koch de Gooreynd (now Lady Norman) who was a disciple of Dame Evelyn Fox, long-standing member of the eugenics society. In her own words she was completely dedicated to Evelyn Fox. And so Priscilla Norman had been working in the Mental Hygiene movement since the 20’s.”

“Origins
Mind was was established as The National Association for Mental Health in 1946 by the merging of three major mental health organisations. These were:

the Central Association for Mental Welfare (established in 1913)  led by the pioneering Dame Evelyn Fox, this organisation worked through local groups of volunteers to help mentally handicapped people
the National Council for Mental Hygiene (established in 1922), which had a strong educational bias and stressed the social causes of mental illness”

Source: A history of Mind.

Notice the mental hygiene history. “Mentally handicapped” = Targetted by Eugenics for removal. Notice the lack of absolute disavowal of NAZI atrocities and eugenics. Notice they were ACTUALLY THE ORGANISATION THAT MONTAGU SETUP IN 1944 ! Notice MINDS complete lack of campaigning and issue raising as the “go to” organisation that works the media, on issues of forced drugging, 100,000 killed by Zyprexa, etc ,etc. No wonder the public are still in the dark ! This is a sin of omission. Like a neighbour “forgetting” to tell you that you are living next door to a murderer, or even forgetting to recommend the book War against the Weak by Edwin Black as your bedtime reading material.

Dr. Donald Ewen Cameron carried out the most perverse experiments yet somehow he was “fit” to analyse Rudolph Hess and appear as an “expert” at Nuremberg. No wonder the scale of this thing was never uncovered.