I knew there was something about this fucking game. 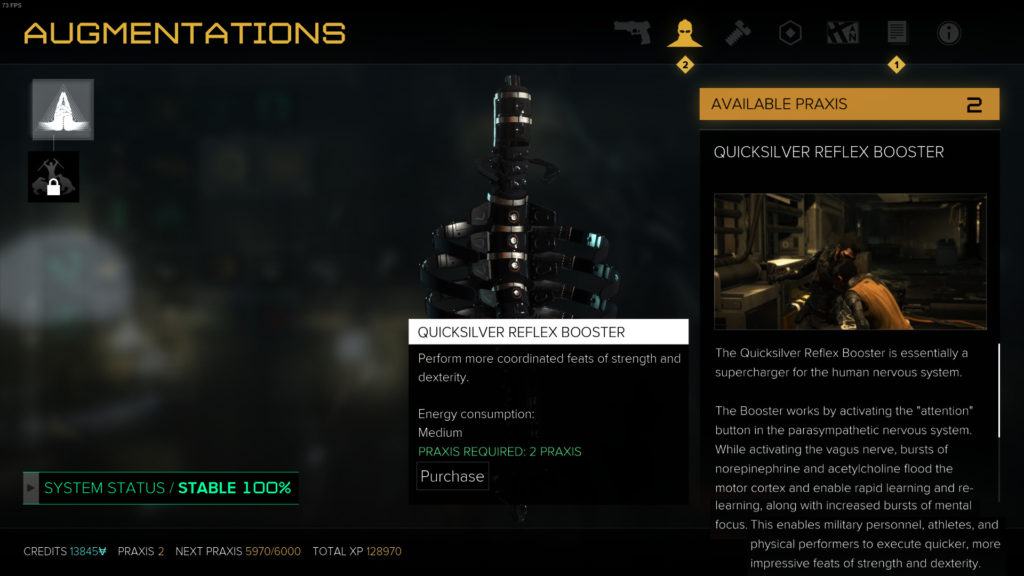 “The Quicksilver Reflex Booster Is essentially a supercharger for the human nervous system.

The Booster works by activating the “attention” button in the parasympathetic nervous system. While activating the vagus nerve, bursts of norepinephrine and acetylcholine flood the motor cortex and enable rapid learning and re-learning, along with increased bursts of mental focus.

“a supercharger for the human nervous system”

Read: A discharger of the human nervous system. Takes neural energy levels down to just above baseline levels.

“works by activating the “attention” button”

“While activating the vagus nerve”

Read: While deactivating the vagus nerve.

“bursts of norepinephrine and acetylcholine flood the motor cortex”

Read: Norepinephrine and acetylcholine are reduced to low levels in the motor cortex, and/or levels are disrupted to being too high or low or fluctuating uncontrollably between the wrong levels. This is intended to leave the victim in permanently unfocussed state.

Read: Enable slow learning and slow re-learning. Enable a dumbed down state where nothing is learnt or retained and it is certainly not “re-learnt”.

“along with increased bursts of mental focus”

Read: Victims of the pharmaceutical companies are so gullible and naive that they don’t think the military have “Smart Drugs” very similar to the fictionalised Deus Ex “Augment”.

Read: I wonder what those Olympic athletes caught “doping” themselves could possibly be using ?

“to execute quicker, more impressive feats of strength and dexterity.”

Read: To execute slower and less impressive feats of weakness and clumsiness. As well as reduced mental dexterity. Above mentioned psych drugs (in title) are known to create movement “disorders” and painful muscle cramping. Gosh guys, what could be causing that ?

Just turn upside down what Deus Ex describes and you get the truth about these drugs and what they really do. They are a DESIGNED TECHNOLOGY. William Gibson (on whose stories the Deus Ex universe is based) wrote about this years ago. Misguided geeks thought he was writing about the internet when his “Cyberspace” was really a representation of the space of the mind and Pan-psychicism.  A universal consciousness to which we all have access to (some refer to it as God). UNLESS you happen to be an inconvenient resister against the plans of these BIZARRE global cults and secret societies as well as Globalism and Socialism. Can’t have any true resistors against that can we ? The intelligent one’s are the one’s who work out how to heal their own trauma. Children are commonly and deliberately traumatised in childhood to become part of some future slave class. Working out how to heal that complex trauma often puts one in the position of going through a healing crisis or spiritual crisis when the usual Jungian Archetypes will be manifested. It can be quite dramatic, a little scary and most people think it means someone “has gone mad” when actually, if allowed to take it’s natural course, the ultimate destination is a healed human being. But not just healed, but “well’er than well” as R D Laing used to put it. Now who might not want THOSE fully activated humans roaming the planet solving complex problems “for which there is no solution” ?

Study the example above. There are ways to heal the damage that these “psychiatric” drugs cause (Hint: “Psychiatric” is just the cover story). You may have been told they cause “permanent damage”. This may be true when someone has been on these drugs for years but even then recovery may be possible. You may have been told “we don’t understand how these drugs work”. Don’t listen ! These criminals know exactly what they are doing. They should be using true “Smart Drugs” like MDMA and I’m sure there are others, although some may argue that no drugs is even better. Nevertheless, just when someone is going through a complex psychological crisis when they need BETTER physical and mental performance, the corrupt psychiatric system is giving them “Dumb Drugs” that LOWER performance. I think Deus Ex actually did a very good job of (inadvertently?) exposing the mechanics of the biology behind this issue in their creative story. Cheers.

P.S. This begs the question. Do the pharmaceutical companies actually have drugs that can cure “Schizophrenia” (and so forth) but they choose not to use them ?

P.P.S. I forgot to add. Deus Ex description of the biology behind this, such as Acetylcholine levels, is very accurate. they did their research. Believe me, I know.