NCIS Psych out episode psychiatric drugs scene (this work is copyrighted but is used here under fair use laws for criticism and review).

In a previous post NCIS: New Orleans got a bad rap for it’s portrayal of those in distress and the idea that “the drugs help”. However NCIS has now redeemed itself with this excellent little episode “Psych Out“. Psychiatry is connected to spook land (yes, they’ve been known to work for them) and Abby and Gibbs go on an extended shtick on how the rubes and suckers are fleeced by con men, in this case with “dangerous psychotropic stimulants” (direct quote) and “drugs that have been proven to cause depression and increased mental instability” (direct quote). Remember those rubes and suckers ? Well you dear reader could easily fall into that category. I’m not insulting you. The most intelligent and humane fall for this kind of con. So listen up ! Listen to Abby and she’ll set you straight in grand NCIS style (Hoorah ! No cowards here !).

NCIS Psych out episode psychiatric drugs scene. When I first watched this episode, and after the little performance in the NCIS: New Orleans episode, my cynical self expected NCIS to avoid naming the drugs after such criticism. Certainly not any trade names, not even generic names ? But I was wrong. To NCIS great credit they actually name the correct drugs ! This part isn’t fiction and is based on stellar research. This is Abby after all, so let’s get it right OK ? OK … 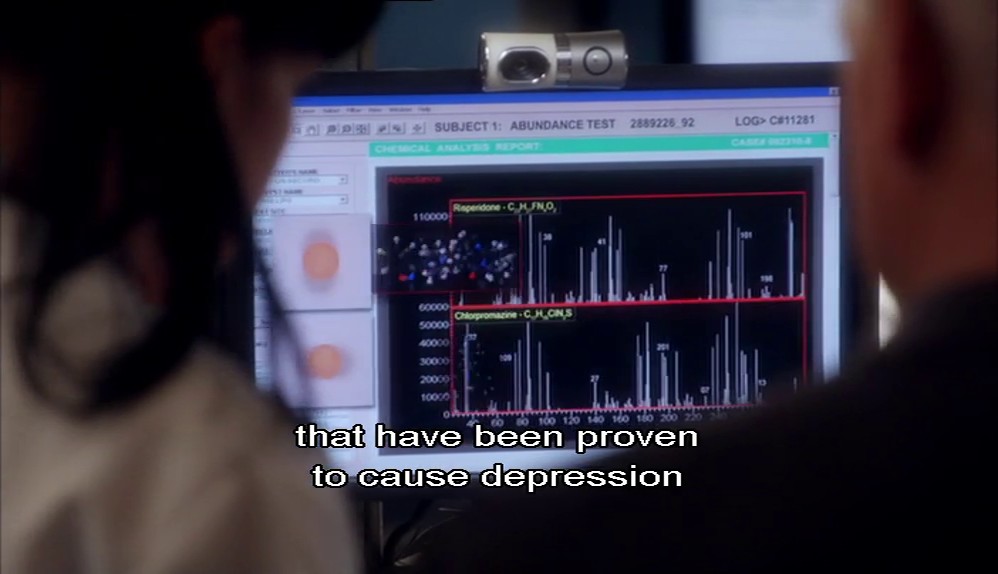 There they are, the little suckers. Risperidone and Chlorpromazine. Respiridone has “increased risk of suicide” hence its use in the episode (the plot starts with a suicide). Chlorpromazine has equally horrible effects.

So well done NCIS. Criminality does exist in the psychiatric profession and pharmaceutical companies. People are fed up of it and are throwing it out around the world.